Established in 2009 by Dr. Eric A. Johnson, Cor Cantiamo is a professional chamber choir whose creative programming and artistry weave contemporary music with choral masterworks to present concerts designed to inspire and engage audiences. This ensemble-in-residence at Northern Illinois University’s School of Music has achieved critical acclaim and recognition for their musicality, impassioned performances, and versatility.

Cor Cantiamo has performed multiple World and U.S. Premieres, and works directly with contemporary composers from around the world. Recent premieres include Verdad (2019) by Libby Larsen, When Did We See You? (2018) by Dominick DiOrio, The Wings of Our Children (2017) by Timothy Takach, and The Seven Heavens (2016) by James Whitbourn.

Cor Cantiamo has also developed an active and successful recording program with an emphasis on recording contemporary works and collaborating with commissioned composers.

Cor Cantiamo has also been selected to perform at several American Choral Director’s Association (ACDA) conferences, and is regularly featured on the Encore program on Classical WNIU’s radio station (90.5 FM).

The mission of Cor Cantiamo is to enrich and empower the community through performances of contemporary choral music, commissions, and music education outreach programs.

The name Cor Cantiamo was created from a fusion of Latin and Italian words. “Cor” traditionally translates to “choir”, though it can also translate to “heart”. “Cantiamo” is the Italian verb meaning “we sing.”  The name Cor Cantiamo embraces the fundamental essence of this ensemble’s efforts. The members of Cor Cantiamo bring their voices together as one to sing with artistry, passion and heart. 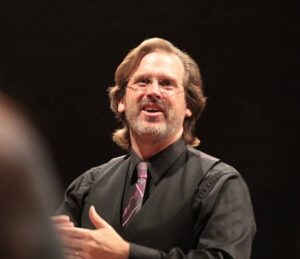 Eric A. Johnson D.M.A. is the Founding Artistic Director of Cor Cantiamo and Director of Choral Activities at Northern Illinois University. Ensembles under his direction have performed at multiple national and division conventions for the National Collegiate Choral Organization, American Choral Directors Association and the Music Educators National Conference. He has served as a guest conductor at Avery Fisher Hall Lincoln Center (2013, 2009), toured internationally (England 2010 and 2006, Sweden and Denmark 2004, Poland 2002), and prepared choruses for collaborations with professional orchestras.

Internationally, Johnson has served as a guest conductor of the Clare College Chapel Choir (Cambridge, England), taught at Makumira University (Arusha, Tanzania), the Universidade do Estado do Rio Grande do Norte (Natal, Brazil), and directed guest choral residencies at Canterbury and Worcester Cathedrals.  As the Artistic Director of Cor Cantiamo, Johnson has recorded commercial CDs released on Centaur Records and the Divine Arts record labels.  He has collaborated with many leading composers of our time including Morten Lauridsen, Libby Larsen, Sir John Tavener, Jaakko Mäntyjärvi, James Whitbourn, Timothy Takach, and Stacey Gibbs.

Dr. Johnson has published music with Santa Barbara Music Publishing, served as a music editor for Earthsongs Publications, and has published articles in the Choral Journal.  He is active nationally as a clinician and guest conductor for high school and collegiate honor choirs, including Head Line Clinician for the Michigan ACDA state Conference, conductor for the Wisconsin Choral Directors Association Collegiate Honor Choir and the Wisconsin School Music Association Women’s All-State Choir.

Board of Directors Expand

Cor Cantiamo is searching for Board Member Volunteers. If you are interested or know a worthy advocate for our mission please email: info@corcantiamo.org